7 Benefits of Making a Bed 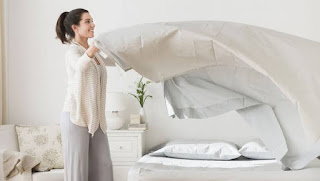 Some of us might immediately make the bed when he just wakes up. Whether it's arranging pillows, folding blankets or arranging bed sheets, there are also some people who wake up but don't immediately tidy them up.
Even though making the bed is a positive activity and gives peace to their hearts. Because making the bed is a form of gratitude for being able to wake up in the morning.
But besides that there are also some people who prefer to make their beds when they go to sleep at night. They say that making the bed before he goes to sleep is something that can make him sleep soundly all night long.

Benefits of Making a Bed

But have you ever thought that making your bed can do you any good? If not here, I will explain some of the benefits of making a bed, let's take a look at the reviews.
1. Sleep Better at Night
According to a survey in 2010 from the Nationalsleep Foundation where those who made their beds in the morning and at night had better sleep quality than those who didn't make them. The proportion of people who make their beds and also those who don't make them only has an insufficient ratio, namely 44% of people who make their beds and also 37% for people who don't make their beds.
Therefore this method is highly recommended for those who experience insomnia or difficulty sleeping at night, because this way might help you sleep faster.
2. Give a sense of happiness
A famous book writer named Gretchen Rubin once wrote a project called The Happyness Project, which said one of his opinions about sleep.
According to him, making a bed turns out to be able to calm a person's heart, because according to him seeing something neat makes the heart more comfortable. Although many of us say that making beds is a trivial and natural activity.
3. Gives a "Win Over Yourself" Sensation
According to some of us, being able to clean the bed before he wants to sleep is a measure that he has succeeded in defeating his ego and laziness.
According to them, being able to manage and overcome small things is a victory and pride for them, because it is like trivial things but according to him it has a positive effect on their lives.
4. Able to Maintain And Manage Schedule of Daily Activities
As I have explained earlier, making the bed provides a comfortable and restful sleep quality when sleeping, so that when you wake up in the morning the body becomes fresher than those who don't make their bed.
And when we wake up we can do activities such as exercise, cooking or cleaning dirty clothes. Starting good habits can certainly cultivate other good habits, as stated by Charles Duhigg in his book entitled The Power Of Habit.
If you often do positive activities such as making your bed either in the morning after waking up or at night when you want to sleep, it will foster other positive activities that can nourish your body both physically and mentally.
5. Sleep Becomes More Maximum
When you have made your bed and moved objects that are not used, such as laptops, cellphones and books, it is also very effective in adding to a deep feeling of sleep. It makes the place you are sleeping on will be even wider, thus increasing the space for you to move around while sleeping.
6. Make Sleeping Equipment More Durable
Some sleeping utensils, such as a blanket, which is often tidied up after use, actually makes it much more durable than equipment that is not tidied up at all, especially for a feather blanket or bed sheet. The two things will be smooth for a lot longer than not being tidied up at all.
7. Reducing Stress And Frustration
A case study once said that people who live in a messy and dirty place actually have high stress levels, this is due to the disruption of the hormone cortisol, which is commonly known as the primary stress hormone.
Those are some of the benefits of making your bed before going to bed or after waking up. There is nothing wrong if we do that? I personally think making the bed is a very positive thing. Hopefully the article I have described can help all of you and can also add a little insight for all of us. Regards
Location: