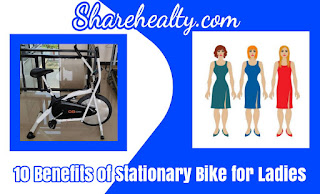 According to my observations recently, many people use their spare time to do cycling, whether it's from small children to adults, even a woman also uses a bicycle too.
However, some of us prefer to exercise at home, because they think that exercising indoors is safe and also protected from street pollution and dust. In addition, many women choose to exercise using bicycles, because they think that exercising by bicycle is a type of exercise that is not too strenuous.

Benefits of Stationary Bike for Ladies

Maybe many of you are curious about the benefits of a stationary bike especially for women? Relax, I will try to explain some of the benefits of stationary bikes for women.
1. Burn Calories With Maximum
Actually, the benefits of exercising are the same, but the goal is different if it is done by a man or woman. If a man is exercising, he certainly has a goal to build body muscles. Very different from women who are more likely to form an ideal body.
Besides that, another goal is to maintain the body weight in order to stay ideal. So that the ideal body weight certainly increases the level of beauty in women.
2. Forming Abdominal Muscles
Just having the ideal body weight in my opinion is not enough, before the stomach shape is perfectly formed. By exercising on a stationary bike, besides being able to provide the ideal body weight, it can also form the muscles in the stomach so that it looks slimmer and sexier.
3. Can Be Done When Coming Month
When menstruation, a woman's obligation to exercise still applies, but we must pay attention that the type of exercise must be light. Exercising using a stationary bicycle turns out to be a mild exercise, very different from exercising on an ordinary bicycle. Cycling using a stationary bicycle is much lighter and can be done when a woman is menstruating.
4. Reducing Stomach Cramps When menstruation
When menstruation comes most women complain of pain and cramps in the stomach. Actually, it usually happens when you have your period, but there is a solution to overcome it all.
By exercising on a stationary bike on a regular basis, it turns out to be able to relax the abdominal muscles when menstruating, so as to reduce pain that is in a woman's stomach when menstruating.
5. Strengthens Leg Muscles And Thigh Muscles
To get the ideal body, of course some women also want to have strong leg muscles and thigh muscles. To get it all is actually not difficult, because just exercising on a stationary bike on a regular basis is certainly able to make the muscles in and legs strong.
6. Lowering Stressful Thoughts
When a woman is stressed, of course there must be something to be targeted, because taking her stress out can make a woman's heart calm. Therefore, you can exercise using a stationary bike when your mind is stressed, because this can reduce stress slowly but surely.
7. Make the Body Become Flexible
Having an ideal body shape and a straight stomach, of course, is a woman's desire. However, having a flexible body must be considered, because a flexible body can certainly make the body free to move.
8. Able to Exercise From Home
Not only a man who has activities outside the home, but women are the same. Besides that, women also have a lot of activities in the house. So that is the reason why women rarely leave the house.
Exercising using a stationary bicycle is one solution so that women can still exercise without having to leave the house. Because exercising using a stationary bike is also very good for health for those of you who can't leave the house.
9. Avoid Pollution
Because static bikes can be used in all places in the house, of course this can protect you from pollution and dust. You just choose a place that you think is the safest from pollution.
10. Avoid The Sun
Many women tend to worry about exercising outside the home, for fear of burning their skin from bad sun rays. Therefore, you can put a stationary bicycle in a place that you think is free from direct sunlight.
Those are some of the benefits of a stationary bicycle for a ladies, because by using a stationary bicycle a housewife can also do sports without having to leave the house, besides exercising using a stationary bicycle you can also do it while watching her children. Hopefully this article can help those of you who want to exercise lightly but don't have to leave the house. Regards
Location: