February 28, 2021
Water Spinach is a type of vegetable that is very popular with the community. Because kale itself has an image of a very tasty and delicious taste, especially when it is made sauteed water spinach. Besides that, just boil it and then combine it with the chili paste it tastes really good. 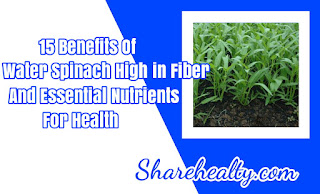 There was also a video about the presence of worms in water spinach vegetables, even though if we wash the water spinach clean, we will be free from various kinds of animals that stick like worms.
Water spinach itself has many benefits, starting from the leaves and stems, but most people throw away the kale stems. Because the stems of water spinach have a slightly hard texture compared to the leaves, even though the stems of water spinach also have many benefits as follows.
1. High Fiber Content
If you have problems with the digestive tract, of course you need foods that are high in fiber. That is why I advise you to eat water spinach stems.
Because the water spinach stems contain very high fiber, even though the water spinach stems have a tougher texture, we can boil them a little longer so that the texture is not too hard but still gets important benefits like fiber.
2. Contains Iron
Anemia is a disease caused by a lack of red blood cells, it occurs because a person consumes less iron-containing foods. Water spinach stems contain iron which is useful for optimizing the production of red blood cells so that it will prevent anemia.
3. As a Source of Carbohydrates
For those of you who are on a diet but don't consume high carbohydrate foods, there is nothing wrong with consuming water spinach, because 100 grams of kale itself contains 3.9 grams of carbohydrates which turns out to be sufficient for energy needs.
4. Contains Important Vitamins
In the stem of water spinach itself, it has 3 main types of vitamins that are very good for the health of the body such as Vitamin C, Vitamin A and Vitamin B Complex. You may already know the benefits of these three main vitamins.
5. Contains Vegetable Protein
Protein is divided into two types, namely animal protein and vegetable protein. Both of these proteins are very important for the health of the body, and in water spinach there are vegetable proteins that have clear benefits.
6. Contains Low Calories
When you are doing a diet program or losing weight, of course the most important thing is not to consume foods that contain high calories. One of them is this water spinach stem which is low in calories but has high fiber, so it is very suitable to be eaten while on a diet.
7. Contains anti-inflammatory
Free radicals can not only cause premature aging of facial skin, but can also cause inflammation if they enter important organs. Although water spinach contains antioxidants that can also overcome inflammation, it turns out that the anti-inflammatory content in water spinach is also able to reduce inflammation in the human body.
8. Good For Eye Health
Maintaining eye health is our obligation, because our eyes are like lights that illuminate the days that we go through, without our eyes we cannot see. That is why watch over our eyes, because God gives it for free, and we are only assigned to guard it.
But many around us are often affected by eye problems such as Minus Eyes, Myopic Eyes or some other eye problems. This is caused by the lack of Vitamin A intake into the body. Therefore eating water spinach can also overcome several eye diseases, because kale itself has a high Vitamin A content.
9. Prevent Diabetes
Diabetes is a very dangerous disease, besides this disease can also have an impact on offspring who used to have diabetes.
To prevent dangerous diseases such as diabetes, of course there are foods or drinks that should not be eaten, such as other foods that contain high sugar. In addition, consuming water spinach and also balanced with regular exercise is also able to treat diabetes.
10. For Liver Health
Water spinach itself contains natural detox which is very good for liver health, because the detox in water spinach is believed to be able to remove toxins and viruses that enter the human liver.
11. Prevent Dehydration
Dehydration or so-called lack of fluids in the body is a common disease but should not be taken lightly. Because if this disease continues it can cause loss of consciousness in humans.
In addition to consuming lots of drinking water, of course you also have to add to consuming vegetables that contain lots of minerals such as potassium and sodium like water spinach vegetables.
12. Prevent Anemia
Consuming water spinach regularly is an effort to treat anemia or lack of red blood cells naturally. Because water spinach itself contains iron which functions to optimize the production of red blood cells. Therefore you do not need to take blood booster supplements.
13. Reducing Cholesterol in the Body
Water spinach is believed to be a vegetable that is low in calories but has a high fiber content. The fiber content in kale serves to bind excess cholesterol in the body.
When the cholesterol is locked by fiber, it will certainly be excreted through the digestive system, with such a process can certainly cause no cholesterol buildup in the body.
14. Increase Endurance
Having a high body resistance certainly makes the body less susceptible to various diseases, so that the body is always healthy. The combination of Vitamin C and antioxidants in water spinach can certainly increase endurance so that it is not susceptible to disease.
15. Good For Brain Development
Water spinach contains Vitamin B which functions for the brain and nervous system development. As I explained earlier that the content of Vitamin B Complex is one of the basic types of vitamins that are very important in the content of water spinach.
Therefore water spinach is very good for consumption for all ages, both parents or even children who are still developing.
Those are some of the benefits contained in water spinach, so many things that can be taken from the nutrients in this water spinach. Hopefully this article can add insight to all of us. Regards
Location: