Facts and benefits of Goldfish, Pets that are Considered Lucky Carriers

March 23, 2021
For those of you who like to maintain ornamental fish, of course you are familiar with goldfish. This type of fish has a very beautiful pattern, and a very bright and striking color. Besides that, the goldfish also has very gentle movements so that anyone who sees it will be amazed by its beauty.
Goldfish also have a different tail and fin shape from various types of fish in general. Because of the unique shape, each person will be much more interested in keeping it in his house. 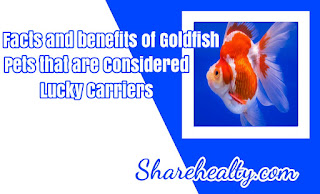 Benefits of Goldfish as Pets

Most people who are interested in raising goldfish have a reason that this type of fish can bring good luck to the owner. Whether myth or fact, many have already felt that this type of fish brings good luck.
If you have any doubts about keeping goldfish here, I will explain some of the benefits of keeping goldfish which are known as lucky fish.
1. Prevent Bad Luck
Goldfish are indeed called lucky fish for their owners and are also able to prevent bad luck. In addition, many people say goldfish invite luck in the form of finance, love and health.
In addition, goldfish are also believed to be able to prevent bad luck for the occupants of the house, this myth has been around since time immemorial and is still believed by most people. If you believe it or not everything comes back to you.
2. Decorating the appearance of the house
If you have an aquarium as much as possible to keep the goldfish, because the presence of this fish in the aquarium will make your house more vibrant and colorful.
This is because goldfish have very beautiful and unique colors and patterns. So that anyone who maintains a goldfish in an aquarium in his house will certainly provide a special atmosphere for the owner of the house.
Especially if you provide a large aquarium, of course it will give an exotic feel to your home. But keep in mind that keep the water in the aquarium clean to keep it clean.
3. Able to Relieve Stress
If you have a heavy mind load, whether it is a matter of work or your family, try to see the movement of the goldfish in your aquarium. Movement is very graceful like a clever dancer.
When you see a goldfish, it will certainly make your mind better gradually. And when your mind returns to normal, of course you can think clearly about work, family, etc. So that it is indirectly able to reduce stress levels significantly.
4. As a therapy for Alzheimer's disease
Several experiments that have been proven that maintaining ornamental fish such as goldfish are able to cure Alzheimer's disease naturally and without treatment.
Because ornamental fish is the best way as a means of therapy to increase the ability of people with Alzheimer's disease to quickly return to health. Of course this is one positive example when maintaining ornamental fish.
So for those of you who have family or friends who suffer from Alzheimer's disease, it doesn't hurt to try therapy using goldfish. Who knows how this method can work to cure this disease.
5. As a Form of Learning
For those of you who have children, of course introducing goldfish as pets is the best step as an effort to learn to love animals. Because then the child will be embedded with the responsibility to look after the pet properly.
But not only goldfish, you can add various types of ornamental fish in the aquarium in your home. So that the child will learn to know the various shapes and types of fish.
6. Is the Best Business Opportunity
Cultivating goldfish is the most effective way as a promising business opportunity. Because goldfish have a very expensive price if they have the right shape and size.
Maintenance is also not that difficult compared to several other types of ornamental fish. You can also cultivate it indoors, because cultivating this type of fish does not require a large space.
In addition, the price of goldfish can also surprise you, because the price of goldfish can be up to hundreds of dollars per fish, depending on the size and shape of the pattern. So how? Are you interested in cultivating goldfish as your business opportunity? Determine from now on.
Those are some of the benefits of keeping goldfish as pets. Besides being able to increase social interaction between parents and children. Maintaining goldfish can also be a business field for you.
Hopefully this article can be useful for all of us, because here I am trying to share knowledge that other sites will not necessarily discuss. Regards
Location: