5 Benefits of Sea Moss for Health 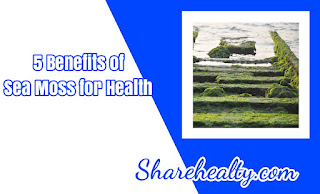 Sea moss has a very different texture from seaweed, because most people only know about sea moss. Sea moss has a scientific name called Chondrus Criptus.
It turns out that even though many people don't know about sea moss, it turns out that there are some people who harvest this sea moss. The method is quite easy, namely pulling it out when the sea water is receding. For sea moss that has been collected, it will go through a drying process first.
When sea moss is completely dry, it will be used as a culinary ingredient, natural remedies and even now there are many supplement products made from sea moss.

Although it is underestimated by most people, there are important benefits contained in this sea moss. And on this occasion I will explain some of the benefits of sea moss.
1. Increase Endurance
Sea moss turns out to have several compounds that can increase the immune system in the human body. The bioactive compounds in sea moss have a very strong immune stimulant. According to some health experts, consuming sea moss can increase genes related to the immune system in the human body, so that it can increase the cell, humoral and immune system.
2. Maintain Healthy Skin
The content of sea moss also has very high antioxidants so that it can protect the skin from very dangerous free radicals. In addition, sea moss also has anti-microbial and anti-inflammatory properties that can overcome inflammation problems.
Anti-microbes in sea moss are also able to prevent and be able to overcome several skin problems such as acne, premature aging, itchy skin due to allergies or animals and also wrinkles on the face.
Apart from that, sea moss is also able to improve skin health, because of the content of amino acids, omega 3 fatty acids and a lot of mineral content in sea moss. That is the reason why sea moss has also been used as an ingredient in beauty products.
3. Overcoming Respiratory Problems
The respiratory system is often very susceptible to problems due to weather changes or infection by other people. Some respiratory problems such as cough, cold, chronic cough and even shortness of breath can be treated with sea moss.
Because sea moss is unique in that it contains anti-virus properties which function to remove mucus that irritates the respiratory system. Mucus that irritates the respiratory system can be treated because of the presence of Griffithsin lectins, Pycocolloid Carrageenan and Sulfated Polysaccharides in sea moss.
4. Maintain the Mood
If you have an irritable mood, of course it will make the environment around you uncomfortable. Because anger is very disturbing to the performance of the brain in humans.
The mineral content, especially iodine, calcium and magnesium, actually plays an active role in reducing anger in a person. In addition, this content is also able to maintain mental health in a person.
When some of these minerals are absorbed by the body, it can increase the performance of the brain in order to reduce anger towards someone. So that it can change someone's mood to be happier every time.
5. Maintain Heart Health
Actually there are a lot of foods that can maintain heart health, but on the other hand, sea moss can also maintain heart health. Because sea moss also contains several nutrients that are needed for the heart.
Some of the nutrients in sea moss, such as sodium, phosphorus, magnesium, potassium, iron, iodine and zinc, are sufficient for your heart's nutritional needs to stay healthy.
Because according to research says that food contains 10 - 100 times more than food on land. That is why many prefer to consume seafood over land vegetables.
Those are some of the benefits of sea moss which I can explain on this occasion. Hopefully it can add new insights to all of us that something that is taken lightly turns out to be very beneficial for the health of our bodies like this sea moss. Regards
Location: