May 03, 2021
The habit of some people is always to peel the potatoes before boiling them. Because according to them, when the potatoes were just bought, they had a dirty skin texture due to the amount of soil that had stuck to them. To prevent dirt from getting into the potatoes, most people will peel them first before boiling them. Even though boiling potatoes with the skin has important health benefits, in fact, there are still many who do not know about this. 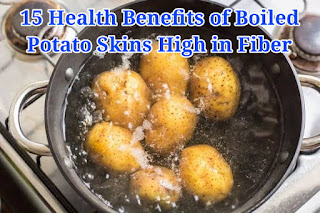 Potatoes are one of the staple foods by people on the European Continent, but it is very different from the majority of people on the Southeast Asian Continent who make potatoes as a variety of food preparations, and some even process potatoes as a side dish.
Because the majority of people in the Asian Continent prefer to use rice as their staple food. When viewed in terms of the nutrients contained in potatoes and rice, they contain carbohydrates which are used to provide energy intake, but don't be surprised if you know that many foods or even soups are mixed with potatoes and eaten with rice.

Maybe it has become a tradition for the people of Southeast Asia to process potatoes as a food mixture, so maybe for some people on the European Continent, it might sound strange and strange.
But many of them often boil potatoes without their skins, even though boiling potatoes with their skins will provide important nutrients that you may not know about. That's why here I will explain some of the health benefits of boiled potato skins.
Read Also : 9 Benefits Potato Skin That Is Good for Hair
1. Contains High Fiber
When you peel a potato skin before boiling it, of course it can get rid of the fiber content in it. Because the high fiber content in potatoes is only on the skin, so it is highly recommended to boil the potatoes with the skins.
Because the benefits of fiber itself are to maintain the health of the digestive system and also prevent various kinds of digestive problems. Because the body really needs adequate fiber intake.
2. Good For Digestive Health
As I just explained, potato skins are high in fiber. Although fiber cannot be absorbed by the body, the benefit is that it helps remove waste products in digestion which will be disposed of with feces.
3. Helps Lose Weight
Besides being good for the digestive system and also being able to maintain its health, it turns out that the fiber content in potato skins can also lose weight optimally. This happens because the fiber content in the thick skin is able to bind fat which often makes you gain weight, when the fat is bound by fiber it will be excreted with feces.
4. Maintain Heart Health
When the body is free from fat, especially in the blood vessels, of course it can keep the heart healthy. Because when the blood vessels do not contain fat, the heart's performance will not be too excessive.
In addition, the potato skin also contains a mineral that can improve blood circulation. So that the heart is not too hard when it pumps blood, because if the heart works hard it can certainly cause several other diseases.
5. Contains High Vitamin C
Unsuspected that potato skins are also rich in Vitamin C, as we know that this vitamin is very important for health, such as increasing the production of collagen in the body so that it makes your skin look firmer.
6. Facilitate Nutrient Absorption
One of the other benefits of Vitamin C is to optimize the absorption of nutrients that have entered the body. So that when the body receives unneeded nutrients, it will be excreted in the metabolic system.
7. Maintain Healthy Skin
Maybe this benefit is an important part of a woman's life, because maintaining healthy skin is a necessity that must be fulfilled for every woman. However, most women are only able to treat the skin from the outside until they forget to take care of the inner skin. The content of Vitamin C in potato skins is also very good for maintaining healthy skin naturally.
8. High in Antioxidants
In the content of potato skins, there are also antioxidants that are needed by the body. Some of the benefits of antioxidants contained in potato skins are to ward off free radicals that cause premature aging, maintain endurance, etc.
9. Overcoming Panda Eye Disease
Panda eye disease is a disease caused by someone who often sleeps late at night. Due to the lack of sleep activity, it will cause black spots to circle your eyes. To overcome this problem, you can use potato skins as a natural therapy.
10. Lowering Cholesterol Levels
Potatoes are vegetables that contain high carbohydrates, but what you need to know is that boiled potato skins are very effective in reducing levels of bad cholesterol in the body. Because remembering that too much bad cholesterol content in the body can cause several dangerous diseases.
11. Preventing and Overcoming Hypertension
Hypertension or high blood pressure is a disease that can cause various other dangerous diseases such as heart attack, stroke etc. To prevent this, you can boil potatoes with the skin in order to prevent and treat hypertension.
12. Lowering Stressful Thoughts
Several studies conducted by health experts say potato skins contain compounds that can make your mind calm. So that if you experience stress problems, it doesn't hurt to consume boiled potato skins.
13. Recommended for Diabetes Sufferers
For diabetics, of course you have to avoid foods that contain sugar, but you still have to eat foods that contain carbohydrates to have energy so they can carry out activities.
You can consume boiled potatoes, because potatoes are also a source of carbohydrates. In addition, consuming boiled potatoes with the skin is highly recommended, because potato skins contain fiber, vitamins and minerals that can keep sugar levels normal.
14. Increase Endurance
As I have explained that potato skins contain antioxidants and vitamin C which are very useful for increasing endurance. If the immune system is strong, then you will not be susceptible to various diseases.
15. Contains Anti-Inflammatory
If you often experience joint diseases such as muscle pain, you can certainly overcome it by consuming boiled potato skins regularly. Because there are anti-inflammatory on potato skins which are often used to treat muscle aches and joint pains.
Those are some of the benefits of boiled potato skins that you need to know, but keep in mind that when you consume them you have to keep the potato skins clean. Wash the potato skins until they are completely clean, because if washing them is not clean, it will certainly have a negative impact on the body. Regards
Location: