6 Benefits of Onion For Stomach and Digestive System

May 22, 2021
Health problems, especially in the stomach and digestive system, make the body feel uncomfortable. However, some of us choose to consume drugs that have their side effects if consumed in the long term.
Indeed consuming drugs has a quick reaction to the problem you are experiencing, but until now some people are still using traditional medicine which is believed to be able to treat diseases naturally and without any side effects.
Some of the health problems that are often experienced by most people are in the stomach, many factors can be caused by health problems in these organs, ranging from consuming excessively spicy food or irregular eating patterns and many more.
Because the stomach organ has a problem, it will certainly cause pain and pain in that part. This makes it uncomfortable for sufferers, such as decreased appetite, inability to carry out activities, and difficulty sleeping. 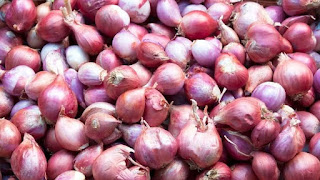 Benefits of Red Onions For Stomach

Currently, there are many drugs in circulation that can cure various problems in the stomach. But did you know that consuming red onions can also overcome various problems and also maintain gastric health, here are some explanations?
1. Able to Overcome Gastritis
Shallots are a kitchen spice that is believed to often hurt gas in the stomach which causes flatulence. But on the other hand, there is one other benefit, which is being able to overcome gastritis problems.
Gastritis is a stomach problem caused by inflammation of the inner lining of the stomach. Some of the factors that cause this problem are the frequent consumption of Non-Steroidal Anti-Inflammatory Drugs (NSAID) and also due to infections caused by the Helicobacter Pylori bacteria.
Some of the symptoms that arise due to gastritis problems include nausea, vomiting, pain in the stomach, and disorders of the digestive tract. Therefore, consuming shallots can reduce the growth of Helicobacter Pylori bacteria in the stomach.
2. Preventing Gastric Cancer
Cancer is a dangerous disease that can cause death for sufferers. In addition, this disease also has various types, one of which is gastric cancer.
The main benefit of consuming shallots regularly is also very nutritious in preventing the growth of cancer cells in the stomach. In addition, you can also combine shallots with several traditional medicines that have the same benefits.
3. Maintaining Stomach Health
Shallots are a type of spice that can have a positive impact on gastric health. Because onions contain nutrients and anti-bacterial compounds that can protect the stomach from various health problems including infections. If the stomach is healthy, it will improve the performance of the stomach and digestive system.
4. Treating Ulcer Disease
An ulcer that causes stomach pain is a disease that is often experienced by many people. The pain is long enough to make the sufferer feel uncomfortable so that it can cause a decrease in appetite.
Decreasing one of someone's experiences on their social media accounts says that regularly consuming raw onions can prevent and also treat ulcers.
For how to consume it, it must also be right and right so that ulcer disease can be prevented permanently. The trick is to chew two raw onions every morning and evening regularly.
5. Overcoming Constipation Problems
Constipation is a disease that often occurs in the digestive tract, if a person lacks food that contains fiber it can cause digestive health problems to occur.
6. Relieves Throat
Someone who has a problem in the throat can certainly cause several problems such as coughing and inflammation of the throat. If you don't want to consume shallots directly, another alternative way is to process them as a dish.
7. Maintain Blood Sugar Levels
Diabetes is a disease caused by high blood sugar levels. For people with this disease, of course, they have to choose the food they will consume. In addition, giving a mixture of onions to the food to be eaten can help stabilize blood sugar levels from rising.
8. Maintain Heart Health
Maintaining heart health can indeed be done by consuming nutritious foods and drinks. But did you know that when the food is made mixed with onions it can make the heart healthier?
9. Maintain Bone And Brain Health
Bones and the brain are components of the body that need to be maintained healthy. In addition to consuming sea fish which is believed to have good benefits for bone and brain health, you can also process it with red onions so that the two combinations can improve bone and brain health.
10. Able to Remove Toxins in the Body
When working outdoors, of course, you will not be aware of what enters the body, be it toxins, dirty air pollution, or even viruses. Consuming red onions can detoxify the body so that it is avoided harmful toxins.
11. Increase Endurance
Having a healthy body is not enough without consuming foods that can increase endurance. A strong immune system is like a shield that protects the body from various types of diseases that will attack health. Red onions are believed to be able to increase the immune system naturally.

Eating raw onions is very effective in preventing and overcoming ulcer disease. But it also has a bad effect on the stomach if consumed in excess, which is to lower the pH which can make the stomach acidic so that it slows down gastric emptying, making it very dangerous for ulcer sufferers. In addition, these side effects can also have a bad impact on people with stomach acid, so for those of you who have this disease problem, it would be nice not to consume raw onions.
Those are some of the benefits of red onions that are good for maintaining a healthy stomach and digestive system, although there are several other benefits that I mentioned, consuming raw onions is not recommended for those of you who have stomach acid problems. In addition, you also should not consume red onions in excess so as not to cause new problems for your health. Regards
Location: