July 13, 2021
The digestive tract is one of the important organs that must be maintained by every human being, because this organ plays an important role in processing all the food that has been consumed and then taking all the nutrients needed by the body.
Basically the digestive tract consists of several parts such as the mouth, throat, stomach and intestines. In each section that I have mentioned, of course, it has its own duties so that it is necessary to maintain its health.
Although it is one of the important organs in the body, it turns out that this part is very vulnerable to health problems, both in small and large categories. To keep the digestive system in a healthy state, of course we must do everything possible to maintain a healthy digestive system.
That's why we must consume healthy foods and of course have a positive impact on health, especially in the digestive organs, one of which is by consuming water spinach. 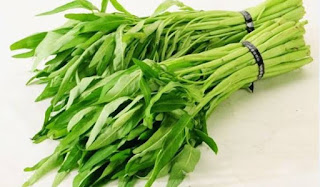 What is Vegetable Water Spinach?

Before I explain some of the benefits of water spinach, of course you should know about the kale. Water spinach is one type of green plant that is very popular in various countries, one of the preparations that use kale is stir-fried water spinach.
This water spinach plant has a scientific name called Ipomea Aquatica, as the name suggests that water spinach plants can be found on the Asian continent and have a water-rich ecosystem.
Morphologically, water spinach plants have a physical shape with smooth leaves and are shaped like arrows along 10-15 centimeters. One of the characteristics of the kale plant is the shape of its stem which is hollow and spreads like a pipe.
In addition, not many know that this water spinach plant can also produce flowers and seed bags that can be cultivated. Although it has a leaf shape that resembles an arrow, it turns out that there are several types of water spinach that you can find in traditional markets that have narrow, elongated and pinnate leaf shapes.

Water spinach plants can not only be processed as food that has a delicious taste, but also has a positive impact on health, especially on the digestive system. That's why on this occasion I will explain some of the benefits of water spinach for digestion that you can know as follows.
1. Increases Endurance
Water spinach contains antioxidants and several vitamins such as Vitamin C which is believed to be able to increase endurance. By increasing one's immune system, it will certainly have a positive impact on health by preventing the entry of bacteria or fungi that enter the body through the digestive organs.
So that indirectly consuming water spinach on a regular basis turns out to be very effective in increasing digestive endurance so that it is not susceptible to several diseases that can cause several other health problems.
2. Overcome Various Digestive Problems
Digestive organs are very susceptible to problems, so you need to consume vegetables that do have a positive impact on digestion, one of which is water spinach. Here are some digestive health problems that can be overcome by consuming water spinach.

This condition is one of the problems that can occur in the digestive organs caused by lack of fiber consumption. So it is highly recommended to consume green vegetables such as water spinach regularly.

Worm Infections in the Intestines

Other digestive disorders can also be overcome by consuming water spinach regularly is the presence of worm infections in the intestines. Because kale contains latex and natural laxative properties, so it can overcome these disorders.
3. Other Important Benefits
Although consuming water spinach regularly has a positive impact on digestive health, it turns out that there are several other important benefits that you can get when consuming water spinach. And here are some other benefits that you can know such as.
Those are some of the benefits of water spinach for digestion and some other important health benefits. Hopefully with this article it can make you aware that consuming vegetables regularly, especially water spinach is very good for digestion and several other organs of the body. Hopefully this article can be useful for you. Regards
Location: