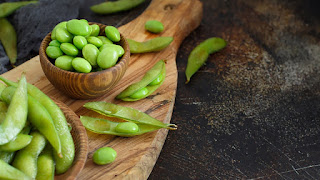 Edamame beans is a fairly popular appetizer, but it is not uncommon that edamame is often used as a snack when relaxing with family. Edamame itself is a plant that is still in the same family as Soybeans, so now many people know about it.

Edamame itself has various types of nutritional content that are very important for the health of the body, especially for men's health. In 1 cup of edamame it turns out to have several contents such as Protein, Fiber, Folic Acid, Omega 3, Energy, Carbohydrates, Vitamin C, Vitamin K, Calcium, Iron and many others. With so many nutrients, consuming edamame has important benefits for men, and here are some explanations.

The prostate is one of the organs in the body that is only found in a man, the organ is just a small gland on the stage that has an important role in the male reproductive system. It is about the size of a walnut and is located between the penis and the bladder. Meanwhile, prostate cancer is a condition in which there are cells that grow uncontrollably in the prostate.
Prostate cancer is one type of disease that is very dangerous, besides that this type of disease has the order of number 2 which often attacks a man who has entered the age of 50 years and over. Prostate cancer itself can occur due to several factors, but the most familiar factor is heredity. A study by the Adventist Health Study revealed that men who consumed edamame regularly could reduce their risk of developing prostate cancer by up to 70%.

Muscle is one of the fine tissues found in the human body, so that every human being has approximately 600 muscles. The muscles themselves have many roles for a man such as walking, running, jumping and other activities that require a lot of energy such as breathing. So if a man has a very good muscle shape, it will give more value to himself.
That's why to have a good muscle shape, of course you have to maintain a healthy diet and often do regular exercise. In addition to being able to have good muscle shape, it turns out that consuming edamame regularly can help build muscle to the maximum. Edamame is very good in helping muscle building in men. In one cup of edamame, contained protein, folate, vitamin K and selenium are very abundant. What needs to be considered is the right time when taking edamame. Men can consume edamame after exercise.

As you know that fertility in a man depends on the sperm he has, so it is very necessary to maintain healthy sperm for a man. because, according to the Cedars-Sinai Fertility and Reproductive Medicine Center, as many as 40% of cases of infertility stem from conditions in men. There are several ways to maintain healthy sperm in men as follows.
In addition, food also has an important role. Edamame is included in one of the foods that can maintain healthy sperm. Edamame contains various nutrients that can help increase fertility in men, including omega-3, vitamin C, and folate. Suggested consumption per day is as much as 1-2 servings of servings.
Those are some of the benefits of consuming edamame for men's health, if you have some of the conditions I have described, it never hurts to try edamame. However, please note that do not consume too much so that unwanted things do not happen, for more details you can consult your doctor. Regards
Location: