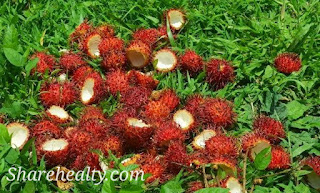 Fever is one type of disease that can be experienced by anyone, be it children to the elderly. This disease is characterized by an increase in body temperature that exceeds normal limits, so it will make a person who experiences it feel always cold.
Some people think that fever is an ordinary disease that can be cured by taking drugs containing Paracetamol. This is true, but if there are other signs such as Headache, Anorexia, Weakness, Muscle Aches and Spasms, you should contact your doctor quickly.

Although it is often taken for granted, it turns out that rambutan skin has a very important content for health. Some of the content of rambutan skin includes phenolic compounds, terpenoids, alkaloids, hydrocyanic acid, phytate, oxalate, flavonoids, polyphenols, saponins, triterpenoids and steroids in rambutan skin with dominant polyphenolic compounds, and tannins.
With this content, of course, it can be used for various treatments to beauty, but with the right processing method. In addition, to get perfect results, it must be consumed regularly.

Indeed, nowadays many people prefer to consume drugs that are already available in drugstores. But not a few people are still using the traditional way to treat fever, especially by using the skin of the rambutan fruit.

In rambutan skin there is a very high content of flavonoids and saponins. The nutritional content is far more than the rambutan fruit and rambutan seeds. These two ingredients are often used as drugs to reduce fever.
Compounds that are thought to have the potential to have antipyretic activity are flavonoids and saponins. Giving flavonoids to patients with fever has been shown to reduce prostaglandin E2 levels by 13%, this is greater than aspirin which showed a decrease of only 11%. In addition to flavonoids, saponins also play a role in reducing fever.

As you know that fever can occur due to several factors, whether it is due to viral, bacterial, fungal infections to the presence of parasites in the body. One of the causes of a person experiencing a fever that is quite dangerous is due to the bite of the Aedes aegypti mosquito.
The aedes aegypti mosquito is a type of mosquito that has killed many people because of its bite. These mosquitoes can breed quickly during the rainy season, this is due to the large pool of water that can be used to put mosquito larvae.
Several groups of compounds known to have insecticidal activity, namely tannins and saponins were found contained in the skin of rambutan fruit. Rambutan fruit peel extract which contains saponin and tannin compounds will act as a poison so that it inhibits the work of the nervous system and damages cell membranes.
To treat fever, the right way of processing rambutan skin is by making steeping water from the skin of the rambutan fruit that can be consumed regularly. The processing method is quite simple, the first step is to clean the skin of the rambutan fruit with 20gr of water that has been dried.
The next step is to pour three glasses of clean water, then boil the dried rambutan skin until it boils. After boiling until boiling, let the cooking water to cool, then strain and drink three times a day, each one third part.
Those are some of the benefits of rambutan skin that I can explain, hopefully the article I write on this occasion can provide benefits and also more knowledge for you. Regards
Location: